In a deposition following a police brutality allegation, Rich Stanek admitted to using the n-word “several” times and defended his right to do so in the company of friends and family as “his business,”

Despite this admission in his deposition, Stanek dishonestly claimed in an interview with KSTP that he “did not use that word” – but last night, Stanek’s lies were exposed

On his first day as a candidate for governor, Rich Stanek lied, claiming he never used the n-word – contradicting his own words in a deposition in which he admitted to using the slur several times. Stanek’s lies were exposed in a follow-up story spotlighting his deposition and past comments on the controversy.

“Mr. Stanek’s decision to double down on his lie about his racist behavior rather than own up to it shows us what kind of leader he would be,” said DFL Party Chairman Martin. “Rich Stanek didn’t just admit to repeatedly using racial slurs under oath – he defended his choice to do so as ‘his business,’ when asked about it. Minnesotans deserve a governor who can be trusted to tell the truth and reject racism. It’s a low bar, and Mr. Stanek failed to clear it.

“The Republican Party should reject his candidacy and make it clear that they do not support the use of racial slurs.”

After falsely claiming in an exclusive interview with KSTP on Tuesday that he “did not use that word,” a copy of the deposition disproved those claims. Furthermore, footage surfaced last night of Stanek taking credit for not denying his racist behavior in 2004. Stanek said that denying it  “would have been the politically expedient thing to do, but that’s not who I am.”

Stanek then doubled down on his defiant posture in a statement issued to KSTP last night, saying his job required him “to recite things that others would say.” In his deposition, Stanek admitted to using the racial slur when he was “not quoting what somebody else said, but merely expressing [his] own thoughts or words.” He also went on to defend his right to do so in the company of friends and family as “his business.”

Stanek’s deposition was documented by the press repeatedly, and Stanek was forced to resign by Republican Governor Tim Pawlenty after the facts became public. 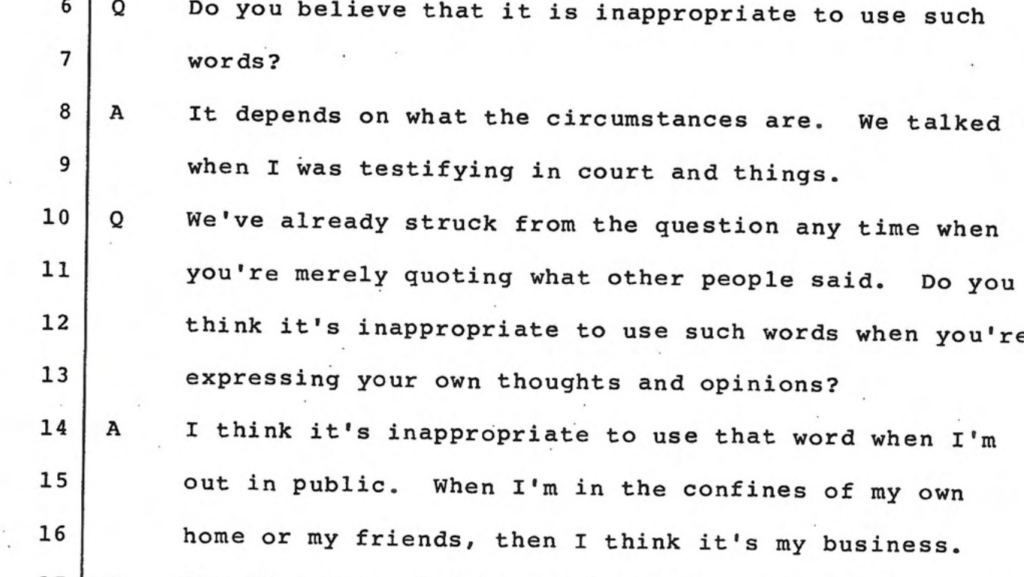