DFL Condemns Tyer Kistner for Downplaying Attack on the Capitol

Less than three weeks after an attack that took the life of a Capitol Police Officer and four others, Kistner dismissed calls for accountability as “fake moral outrage” and pled for donations in the name of “liberty, prosperity, and Law and Order”

Today, DFL Chairman Ken Martin denounced Republican Congressional Candidate Tyler Kistner for a recent fundraising drive that dismissed reaction to the deadly attack on the United States Capitol as “fake moral outrage.” In a recent fundraising email, Kistner criticized those engaged in a bipartisan effort to ensure accountability for the President’s crimes as “playing partisan games,” and urged his followers to donate to his campaign in the name of “liberty, prosperity, and Law and Order.” 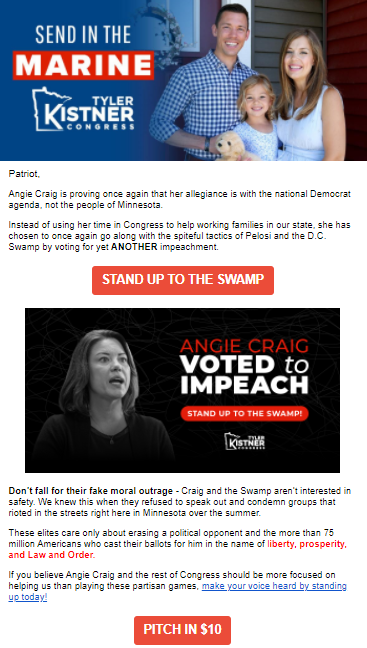 This is hardly the first time that Kistner’s reckless campaign messaging has crossed the line. Just weeks before the attempted insurrection at the Capitol, Kistner called into question the legitimacy of Minnesota’s elections, encouraged “patriots” to “fight back to protect America” and warned his supporters that, “if we allow threats to our democracy to be tolerated now, they will only get worse in the future.”

“Tyler’s casual dismissal of a vicious attack that took the life of a Capitol Police Officer clearly demonstrates that his campaign’s emphasis on law and order was nothing more than empty political rhetoric unleashed for his own personal gain. He should be ashamed.

Employees don’t have immunity for crimes they commit on the job just because they put their two weeks’ notice in – and neither should the President of the United States. The simple fact of the matter is that the President summoned insurrectionists to Washington, incited them into a furor and ordered them to march on the Capitol. None of this would have happened if it weren’t for President Trump. He is culpable for the death and destruction that occurred that day – and he must be held accountable for these crimes.”