As President Trump doubles down this morning on a boast that he slowed COVID-19 testing for the American people to benefit himself politically, Congressman Jim Hagedorn has an obligation to condemn his remarks, his inadequate response to the pandemic, and show independence from his recklessness by standing up for the millions of Americans at risk of losing their lives to this virus. 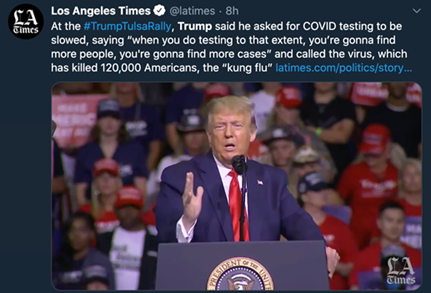 “When you do testing to that extent, you’re going to find more people, you’re going to find more cases. So I said to my people, ‘Slow the testing down, please!’” the president bragged to a mostly empty crowd gathered at the BOK Center for his reelection kick-off rally this weekend. Trump’s remarks come as the U.S. death toll rises to over 122,000 following months of a delayed and bungled response that public health experts called too slow.

“Jim Hagedorn is putting his political party before the safety and health of Minnesotans by remaining silent as the President brags about slowing down the government’s response to a virus that has killed more than 122,000 Americans. Americans died while waiting for COVID-19 tests. Hagedorn has an obligation to stand up and condemn the President’s decision to jeopardize lives.”